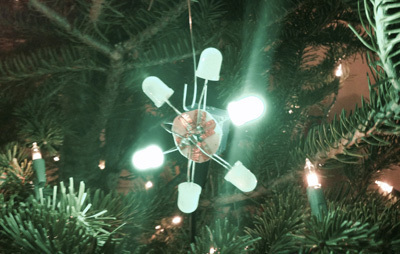 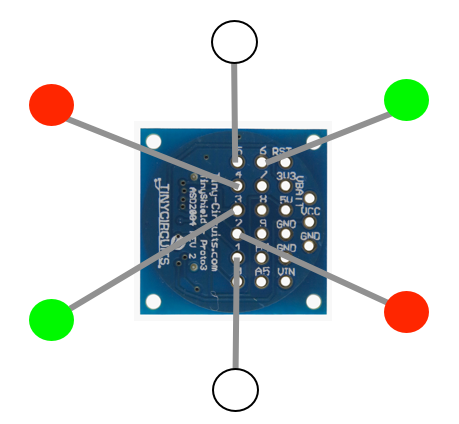 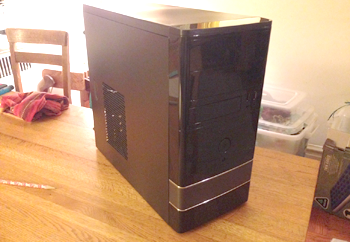 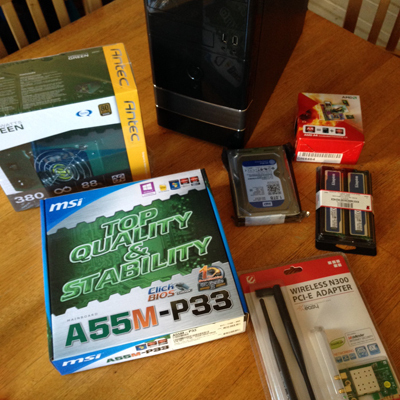 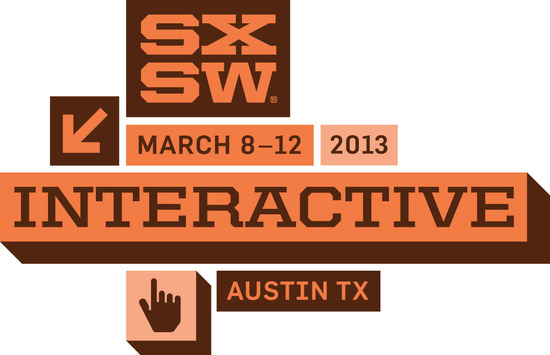 Today I'm talking about how the WNYC Data News team has done some quick-turnaround projects, especially around Sandy, at the IRE Computer Assisted Reporting conference.

Here are the slides for my presentation, including links I reference.

I also wrote a quick outline about our thinking on how we could best serve our audience during the storm, called "Predicting Questions, Building Answers."

One of my "show don't tell" projects was mentioned this month in a Harvard Business Review article by Tom Kelley and David Kelley of IDEO. For more about the experiment -- and to give it a try -- jump over to this post.

More data journalism classes are on the way, at little schools and big ones. I'm hearing this through the grapevine. Several grapevines today, in fact. And I think it's fantastic. 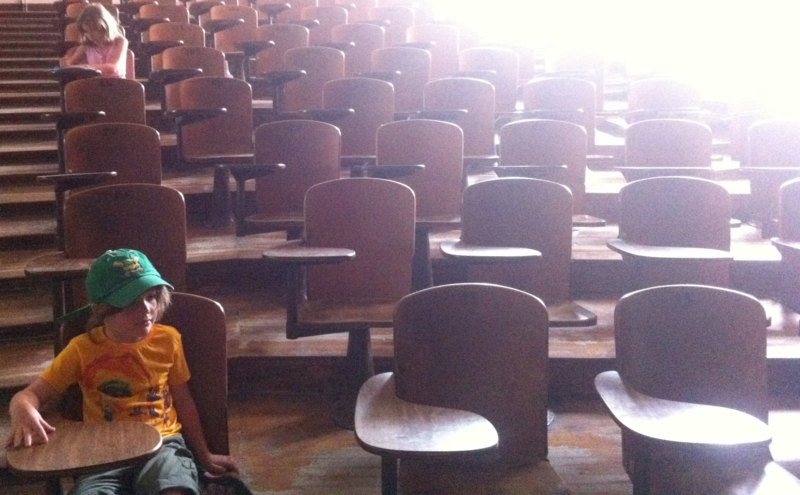 When asked what such a course might look like, I point folks to Brian Boyer's theoretical and amazing Hacker Journalism 101. Journalism needs more journalists who can code, and this is a great way to get there.

That's programming, though, you say. We can't teach programming in a journalism class!

You can, and you should. Basic programming will help journalists understand and deal with data used by cities, cops, politicians, agencies, campaigns, companies, banks, stores, non-profits, advocacy groups and just about any other source you can think of.

Knowing how to code, even a little, is like having a solar calculator for that database you just scored.

In addition to programming, here are some of my favorite topics for classes, readings or workshops:

And I'd have 'em code something. Every week.

What have I left out? Add comments below and I'll update this post -- and my advice to others.

Photo: My daughters in a UW-Madison lecture hall where I studied geography. Both of them have dabbled in coding.

While preparing for the real-time challenge of Election night, the WNYC Data News Team -- and the entire city -- turned its attention to an oncoming storm.

For our Hurricane Sandy coverage, we quickly built and maintained several data projects to help convey information people needed. All used open, public data and several were updated regularly -- either automatically or by hand.

For details on the data, follow the source links on each project.

With more time, we would have worked more on the aethetics. But time wasn't something we had much of, so we did our best to be accurate and clear given the resources available.

Read more about the WNYC Data News team's thinking behind our Sandy coverage.

Saturday morning we did something fun: We counted the number of people who took the subway to the opening-night Jay-Z concert at Brooklyns new Barclays Center the night before.

Or at least got pretty close.

Traffic and transit were closely watched for the new arena, as it the 19,000 or so concertgoers would have just 541 parking spaces. So we decided to grab data from subway turnstiles to measure the crowds leaving the Atlantic Ave-Barclays Center station for the show.

How we did it

Turning around the data overnight took a little planning. Here's how we pulled it off:

Every Saturday morning, the MTA posts turnstile data for the previous week. Fortunately for us, the last reading is 8 p.m. Friday, the scheduled start time for the concert.

The data files contain the entry and exit counter readings for each turnstile in the system as a sort of "odometer" reading. The data is a little tricky to use, though it does have a regular structure.

So Steve Melendez, our Data News Team programmer, wrote some Python code that grabs the data files and puts the individual readings into a SQLite database. He then sorted the readings by station (using this chart), and calculated how many exit clicks were logged for the Atlantic Avenue station from 4 p.m. to 8 p.m.

We suspected there would be a jump in the time period before the concert. So earlier in the week, we ran the numbers for each Friday for much of the year and calculated those averages (I ended up using just September, because they were higher, post-summer vacation readings). Then, Saturday morning, Steven got up really early Saturday and ran the program again, including the newly posted numbers.

He sent me the latest values, and I added them to the chart in a taxi on the way to the station. At 8:35 a.m., I was on the air talking about how it appears about a third of the concert-goers took the subway.

It could be more: Some people could have left the system at another station. And if anyone left through an emergency exit, or if they showed up after 8 p.m., they wouldn't be in our turnstile data.

But it's a place to start, and we'll be watching how these numbers change for future concerts and for Brooklyn Nets games.

The WNYC Data News team isn't just about maps. We dig into all kinds of structured data -- and the 2012 Olympics will generate a bunch of it.

There are some great efforts afoot to follow the Games, with the New York Times doing amazing work as always.

Our slice of that effort is the Team NYC Olympian Tracker, which we made to help our audience follow who's competing today, who's in contention for a medal and who's won medals. 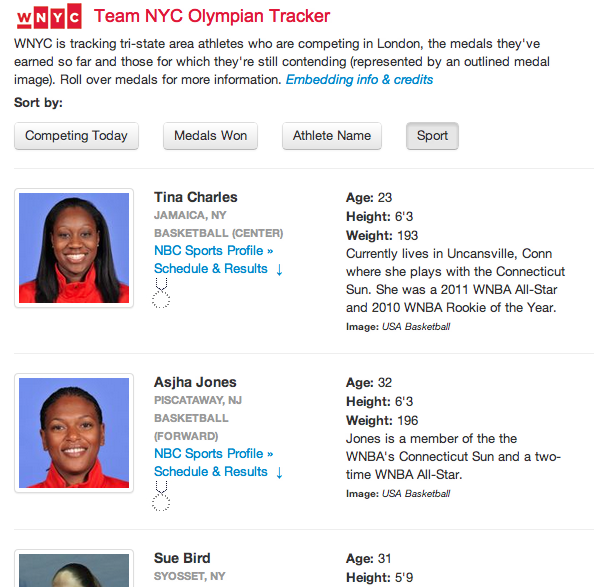 The entire application fed by a Google Spreadsheet, which is linked to the chart by a cool data tookit called Miso, from The Guardian and Bocoup.  Since we're inthe process of interviewing for designers, we went with a clean and quick design using Bootstrap.

It was a fun project and, just like a map, built to make interesting data easy to use.

This week, we published a map showing total NYPD stop and frisks by block together with locations where guns were discovered during such stops.

In the tradition of showing our work, here's some information about how we built it -- and data you can download and explore yourself.

The major bumps I hit working with the NYPD's Stop, Question and Frisk data sets were 1) they're in a format I don't know, and 2) the geographic locations aren't in latitudes and longitudes.

For bump #1, I used the free statistical program "R" to convert the NYPD's ".por" files into something I could use. R is also great at handling big data sets, and easily managed the 685,724 stops in the 2011 file.

For bump #2, I noticed that each stop had data fields called "XCOORD" and "YCOORD." A couple of tests confirmed that those values described the stop's position on the New York-Long Island State Plane Coordinate System -- something I've seen in a lot of city data. So I used the free geographic software QGIS to load in the data and convert (technically, reproject) those coordinates into latitudes and longitudes.

And now you can have the data I used to make the map. Just click to download:

stopfrisk2011_databundle_with_allstops.zip
(51MB download, unzips to 500MB)
This file has of the above and a .csv with the raw data for all 685,724 stops in 2011. While it's in a more common format than what the NYPD provides, it's too big to open in Excel and maxes out the limits for Google Fusion Tables. So you'll need a stats program like R or some database know-how to handle it.

I built the map using TileMill from Mapbox, which I've been playing with for some months now.

While it's tricker than generating quick maps from Fusion Tables, if you're patient and spend some time with it, you can make some pretty gorgeous maps.

Besides providing wonderful control over styles and colors, TileMill solves an important problem: New York City has roughly 38,500 census blocks -- and loading the data to draw them all onto a Google map will anger any browser. With TileMill, you bake the data into individual image tiles, which get served up to the user as they zoom and pan.

To cover the area of NYC and provide 8 levels of zoom, I pre-cooked 59,095 tiles. But once they're uploaded to the MapBox server, which took about 15 minutes, they load almost instantly.

As always, I welcome comments and questions below or at john (at) johnkeefe.net.