Back when a dozen people were vying for the presidency, I watched one of the debates at home alone, wishing I was in the company of people I respect to hear their thoughts.Quick searches found the live blogging to be either slower or noisier than I wanted.So as the presidential debates approached, I asked a tiger team at the station to come up a "live debate companion" fed by our top thinkers.For the first McCain/Obama debate, we had John Hockenberry, Brooke Gladstone, Brian Lehrer and Andrea Bernstein tweet into their own accounts, which were presented in a self-updating Twitter/Web solution called Monittor. In a separate window, we fed a steady update of any tweet worldwide that included the word "debate" or the candidates' names -- offering a living, breathing experience, with a nice feel. It was also easy to share across our websites and other stations.It turns out that the Twitterverse gets reeeeeallly slow during the debates, and that made the end result less interesting than we had hoped. Also -- hard to provide the trademark public-radio context in 140 characters.

For the Palen/Biden debate, we switched to CoverItLive, which provided a rockin', real-time experience. We hit some (yet unknown) room capacity, but for those able to join, it really flowed well. We copy-pasted some analysis into tweets, too.Two strong signs we're on the right track:1) The next day, the critiques at the station, including a chunk of a Takeaway planning meeting, centered on the content of the event, not the technology.2) This:

[Comment From Chris, NYC]
This was a great experience. Thanks for your company.

"Company." Bingo.We'll do it again Tuesday.UPDATED OCTOBER 14: We learned today that there 1026 people participated in the Live Debate Companion for the 2nd presidential candidates' debate. That's exciting.

If we're collaborating on an art project, would you rather have access to my great paintings or my awesome set of paints?In public radio, the currency of collaboration is often the painting. Or the "piece," really. It's the 3- to 5-minute story that's carefully crafted, rich with texture and color, and takes the listener somewhere compelling. 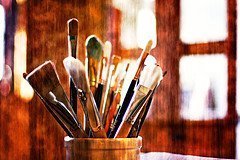 Trading in these paintings, though, is frought with problems. First, they have a high emotional investment. And very often, the painting looks (sounds) great on the walls (airwaves) of the local station, but doesn't quite fit the style of the station down the road. Or the national show.To solve this, there are many local, regional and national workshops geared toward getting everyone to paint more like each other ... or at least make sure they match the walls of one particular house.But maybe the answer is in collaborations centered around the tools of our trade, not the end result.Time to experiment with collaborating around:
Then, separately or together, the we can craft great works of journalism.

<script src="http://vote2008.thetakeaway.org/wp-content/files/tools/electoral_college_maps_vote2008_takeaway_big_embed.js" type="text/javascript"></script>Amazing design by my friend and colleague Adnaan Wasey, pulling together the electoral maps from many different sources -- highlighting nicely the differences, the swing states and the proportions at stake. Nice.

How do you read 11,000+ pages of a First Lady's schedules? Ask 11,000 friends to help! Today on the Brian Lehrer Show, that's exactly what we're going to do.Hillary Clinton just released her schedules from her First Lady days, and we're going to ask listeners to pick the week of their birthday in any year of the schedules and look for things that are interesting or surprising ... and post the findings on a Brian Lehrer web page.As WNYC reporter Andrea Bernstein pores through the pages, she'll also keep an eye on the web postings for gems listeners find. Let's see what this "professional-public" collaborative journalism project (or "pro-am" in journo jargon) can discover.

Really interesting conference shaping up about how to reimagine newsrooms in the digital age. What works? What doesn't?

Everything from how to shape a newsroom, how to reconsider management of news folks, and even whether a physical newsroom is necessary.The second half of the conference is being shaped by a make-your-own workshop wiki page. Should be cool to see what emerges.

I hereby end the Silent Phase of design agitation.Lots of interesting things have happened since last fall, not the least of which has been the development of WNYC's new morning show, The Takeaway with John Hockenberry & Adaora Udoji. Watch for it to hit the airwaves in the coming weeks.Design thinking has been a big part of the development, including areas such as:
And lots, lots more.In addition, WNYC's entire election coverage has been supported by design thinking principles. And as we move into our brand new facility, other design elements are coming into play.Details to come ...
John

While things have been quiet on this blog, lots has been going on under the surface. Once it becomes public, I hope to have a LOT to post here.

The skinny is that folks here at WNYC are working closely with the Hasso Plattner Institute of Design at Stanford (aka the d.school) to redesign public radio mornings. The show is a collaboration of WNYC and Public Radio International, with the BBC, the New York Times and WGBH. You can read more about it here.So more to come on that. If you're interested, subscribe to the atom feed and you'll get more when it becomes available.In the interim, I'll drop in occasionally to point out interesting things we and others are doing with design and human-centered processes. 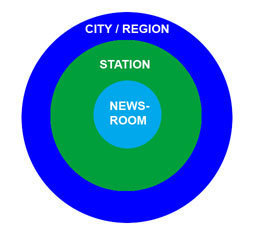 Last week at a meeting of public radio news directors, I gave a presentation about the importance of prototyping for disaster planning -- getting off our chairs and actually trying out our plans. Here's a quick sketch of the speech, with documents included. Key PrinciplesCONSIDER OPERATIONS AND SYSTEMS -- To do good journalism in moments of crisis, your systems and operations have to be ready at three levels: newsroom, station and a backup site in your city/region. PROTOTYPE PROTOTYPE PROTOTYPE -- To find out if you're ready, try it, test it, simulate it, do it. And repeat. Don't just write emails. And don't get too complicated. Take a page from design thinking and keep it simple. Then you don't get too invested in the test, and are open to changing your ways. Prototyping Newsroom Systems

Example 1 -- Crisis Information Flow
At WNYC, we used Post-It notes to simulate how information flows through our newsroom to air during a breaking news situation. "Facts" were represented by shapes, and we watched how they moved (or didn't) through the process. We learned a ton, which you can see in our full case study, including a 15-mininute movie. What we learned improved our coverage of a big news story that broke the very next day.

Example 2 -- Full Scale Drill
We've also done a full-scale crisis drill, simulating a dirty-bomb attack. This involved the entire news and technical staff, who responded to information (wire stories, witness information, etc.) sent to them roughly once a minute for an hour. Due to the sensitive nature of this drill, I have not posted our case study. If you are interested in learning more about it, please contact me. Prototyping Station PreparednessExample -- Blackout Plans
To test our backup power, we regularly cut power to our facility (usually late at night) and make sure it still works. During the day, we actually relocate hosts to our backup room, as they'd do in a real outage.l Just three weeks ago, two of us got out of our chairs, walked to a key breaker box, and took a new look at which switches we'd have to throw in a blackout. In the process, we realized there were no backup lights in that room, so we wouldn't have been able to see the switches! We solved this with a $15 power-failure light.

Prototyping Operations Elsewhere in Your City/RegionExample -- Make Other Arrangements
Be ready to move somewhere else; we've had to do it twice (once on 9/11, once during the northeast blackout of 2003). We've arranged with another local studio to be our backup facility, and we have key equipment and supplies in place there now. Our full news and technical staff will be visiting the facility to see, touch and feel what it's like to set up there. We're also installing our own set of phone lines so we can do live call-in programs -- which have been essential components of our crisis coverage.TipsClick here for a 2-page PDF of helpful tips and tricks for public radio stations.
_______