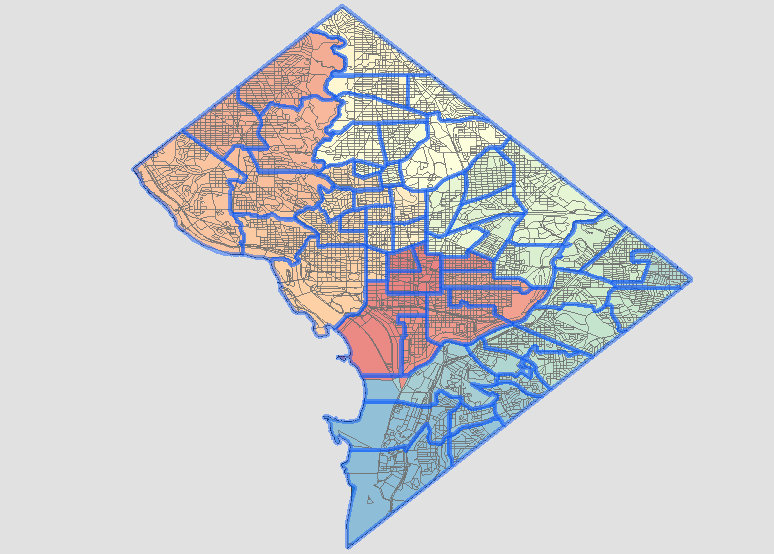 In this zip file there are four data files:

dc_2010pop_by_2020police_districts.csv is the 2010 US Census data on race and ethnicity (just Hispanic or non-Hispanic, alas), summed by DC's seven police districts, as those boundaries are drawn today. The columns follow the Census bureau's coding:

dc_2010pop_by_2020public_service_area.csv is the same thing, but aggregated by public service area — which are smaller units within a police district.

dc_2010blocks_2020policedistricts_key.csv is the "Rosetta Stone" of the project, linking block numbers (as "GEOID10") to police districts and public service areas. I did this using the QGIS open-source mapping software, with some batch processing and visual inspections of each zone.


I'm pretty confident in the process here, but that doesn't mean I didn't make mistakes. You can check my math in the Jupyter notebooks I used. Generally DC police boundaries run along census blocks pretty closely. There were a few big blocks that straddled zones, but each of those was either in water, in a park, or, in on case, on federal property. So the residential population numbers should line up nicely.
That said, remember that this population data is 10 years old — and a lot has changed in DC in that time. For now, it's the best we have. We'll get new numbers with the 2020 census (fill out your form!)

Tweet at me at @jkeefe if this helps you ... and especially if you find anything amiss. Also hit me up if you'd like this for data work you're doing in your city.