Thousands of people live in the Hudson River.

That's what you'd think, at least, by looking at U.S. Census tract maps for New York City, because census tracts extend to the state line. 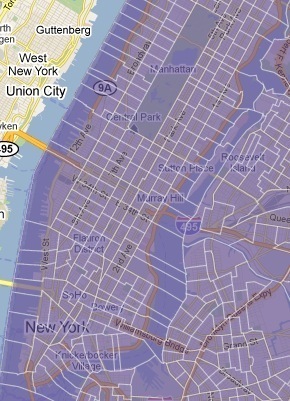 But a population map drawn like this isn't attractive, and isn't accurate, either. It suggests inhabited areas at the coast are far larger than actually they are.

So what's a journo-mapper to do?

Fortunately, the Census Bureau also publishes shapefiles of all of the water in the U.S. So one solution is to tell you trusty computer to subtract the water areas from the tracts -- and the difference will be the parts on land.

Doing this turns out to be far easier than I expected. (Thanks to Michael Corey and Nathan Woodrow who responded to my help tweet.) Here's what I did:

1. Opened my census tract shapefile with QGIS (a free, open-source mapping program I'm getting to know). 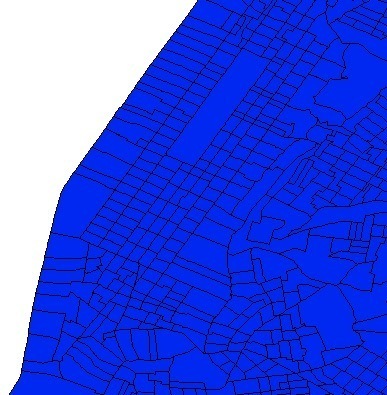 2. Found the water shapefile for Manhattan (New York County) and opened it as a new layer in QGIS. 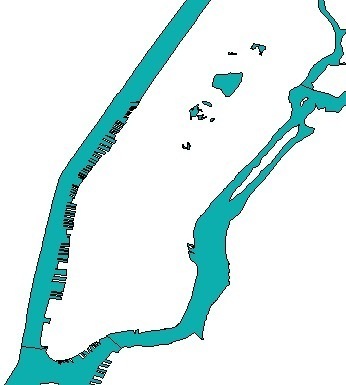 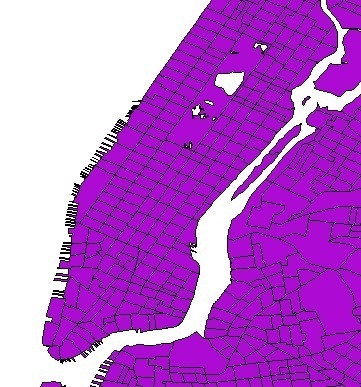 4. Compressed the resulting shapefile set into one .zip file and uploaded it to Google Fusion tables using shpescape. Once in Fusion Tables, I can play with it, view the map and merge it with population data. 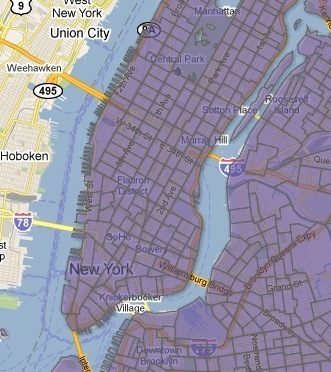 A few extra notes and tips for those trying this at home:

- I've found water shapefiles only for individual counties, which makes for a small pain to do an entire state. For New York City, which is five counties, I loaded the five water shapefiles into QGIS, made sure they were all visible, and used Layer -> Save Selection as Vector File... to save them all as one shapefile. I then used the resulting shapefile in the Symetrical Difference process.

- Be sure the water map represents the same census year as the tract map (and, of course, your data). Very likely you'll be using shapefiles for the previous decennial census. For our New Littles map we had 2009 data, so we used the appropriate tract and water shapes -- which were from the 2000 census.

- I get an error about missing coordinate information when I do step 3, but it hasn't caused me any problems I know of. Also, on my Mac version of QGIS, the Symetirical Difference window and the file-saving dialog box conflict -- but I just moved them to their own side of the screen.

- Census tracts are made up of census "blocks," which are smaller and generally DO follow coastlines. So if you're mapping blocks, you can eliminate the watery ones by excluding any block with an "area land" of zero.

- The difference trick doesn't change the meta-data associated with each tract, which generally is a good thing.