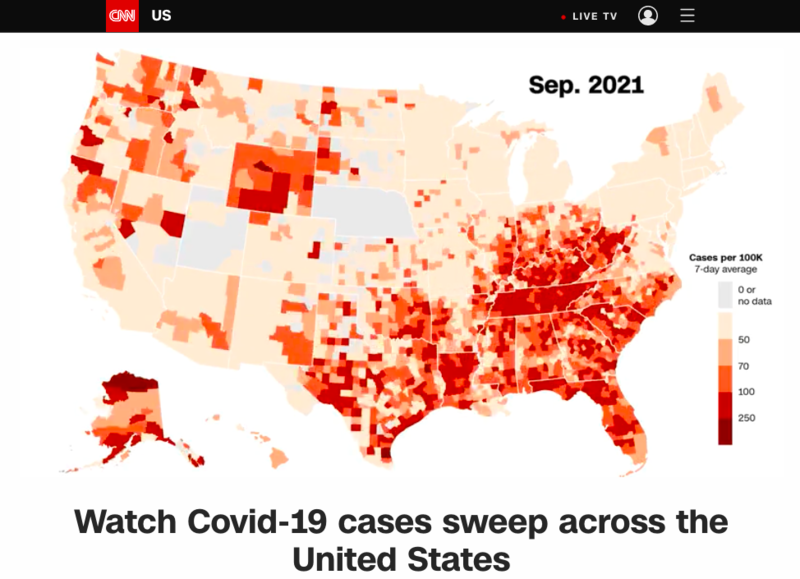 I've been both awed and terrified by the transmissibility of Omicron and the speed at which it's spread. As the case curves hockey-sticked upward and the maps all turned red, I thought it'd be interesting to visualize the spread of this new twist on the coronavirus.

So the other day, while doing some work mapping Covid-19 data by US counties, I realized it wouldn't take much to generate a map for each day of the pandemic ... and make those maps into a movie.

It almost seems like cheating to use a work project as one of my "Make Every Week" projects, but I'm lucky to have a job where creative tinkering is celebrated. When I shared a tinker-made movie of six months of case data with colleagues Kaeti Hinck and Sean O'Key, they thought it would make a good data feature for CNN.

While truly a horrible topic — nearly every county is now reporting more than 100 cases per 100,000 people — the process of turning that case data into a movie was a worthy project. I learned a lot, and I did it almost entirely from the command line (the text-only interface that is my Mac's "Terminal" program).

The case data for every day in the pandemic, by county, is freely available in the Github repository maintained by the Johns Hopkins University Center for Systems Science and Engineering. I downloaded it from the command line using the curl command.

The John's Hopkins data tracks daily cumulative cases by county, so I had to do a little math to get the new cases (the difference from the day before) and the 7-day rolling average of new cases for each day.

To get the rate per 100,000 people in each county, I needed the county populations, which are available from the US Census Bureau. I was fortunate to have those tables handy, since a bunch of us worked on them when the 2020 data came out. But you can also get them from the Census website (which I've also downloaded to my Github account). The "P1_001N" column is the total population.

Tip: The "FIPS" code, which is the key to joining the Census data to the Johns Hopkins data, is the last five characters of the "GEO_ID" in the population table.

Also available from the Census website are the national county shapefiles.

With the data and the shapes by county, I can use the amazing Mapshaper tool's commands to build the maps. The -i command takes in the shapefile, the -join command marries the .csv with the shapefile, and the -classify command colors each county based on the case rate, allowing for custom colors and breaks, such as the 50,70,100,250 I used.

Fortunately the -o or -output command will save the map as an SVG if you use the .svg extension on the file name. This is key, since SVGs can become images that can become frames of a movie.

I had to run a Mapshaper command for each day — to make a map a day — and I'm not good enough on the command line to make it run loops. But Mapshaper works programmatically in Nodejs, so I wrote a little script to do that.

With a folder full of SVGs, I used Imagemagick Mogrify to batch-format them into PNGs and also adjust each image's "extent," or canvas, to the video-frame size I needed.

I used a couple of other Imagemagick tricks to draw the dates onto each image. And then I made a legend in Adobe Illustrator and saved it as a PNG, which I then overlaid on every map image using Imagemagick composite.

Finally, I used the command-line program ffmpeg to turn my folder of images into a video.

Instead of trying to remember each command-line command as I go along, I've made a habit of writing each command into a Makefile. Then I can type make maps or make legends, which issues the commands to complete the task. It also give me a de-facto, executable log of what worked — which was essential, since I ended up making several iterations before settling on the final version.

In the end, my make movie command takes about five minutes to run ... and when it's done, I have the animation you can see atop the story.

Six months from now, I hope to use the same code to show how Covid-19 disappeared into the background of our lives.