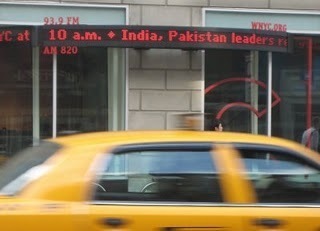 I've joined an exclusive club of New York City microbloggers.Twitter? Ha. Facebook? Kidstuff. We're talking bricks and mortar, baby.Quite literally.My missives scroll across the facade of WNYC's building in west SoHo, zipping into your field of view as a parade of little red lights. It's the WNYC News Zipper.As you walk to work or sit in traffic on Varick Street, I've got your eyeballs.

None of this 140-character stuff. Better to use just five words; seven max. (I used a nonessential adjective clause once. Lost everyone by the second comma.)

And I know where you are, no fancy GPS required.

Building collapse on Reade Street, up ahead


Even if it's partly cloudy in the Bronx, I am absolutely certain you're in a downpour.

This rain ends by evening

User customization? Easy. I can sense you're in line for the Holland Tunnel on your evening commute home. So how about a little news about your governor and his chief rival?

It's tempting to simply repurpose our tweets or web headlines, feeding them automatically to the sign. But it's also clear that wouldn't be as special. Or impactful. Or memorable. So I've been recrafting our material specifically for my particular version of a hyperlocal, mobile user.I've been doing this for a few weeks as a prototype, and soon WNYC's editors, producers and hosts will feed lines to the sign. What I've learned by writing -- and watching -- those little red words will help our staff craft the phrases that catch your eye as you zip by.