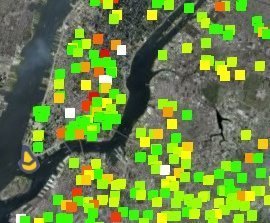 In my quest for timely, interesting, understandable info-graphics, I've set up a prototyping challenge for myself: Upon finding news data, turn it into something visual, compelling and useful ... as fast as possible.I'm prepared to fail quickly and often.In this case, "as fast as possible" was three days to make, another two to find time to post it. The result is not wholly useful. And you can't absorb it quickly. And it's a little misleading.But it's a start.Here is what I made. It's a visual representation of the attendance rates for every public school in New York City on Thursday, May 21, 2009. The New York City Department of Education started posting this data the previous day as the Swine Flu/H1N1 outbreak was causing kids to stay home.It tells me two things off the bat:

1) Queens and Brooklyn schools had much lower attendance rates than Manhattan and Staten Island schools.2) Teens skip school on nice May days.


No. 2 is apparent because almost every red square is a high school, which have notoriously low rates this time of year. For a better indication of potentially flu-related absences, I'd chart the difference between these absentee rates and a typical May day at each school ... which is info I don't have. Yet.Initially I published this in Google Maps, which was interactive and allowed you to click on schools for specific info. But Google Maps only plotted about 100 or so schools, and there are more than 1,000 here. Instead, I did it in Google Earth on my own computer and took a snapshot. Here's another.Kinda cool. Was fun to do.Next!----------Anatomy of the process:Daily absentee data from the school system is here.
An Excel spreadsheet with general data on each school is here.
I crossed these two data sets in Access to match school numbers with addresses.
I got the latitude and longitude for each address, in 500-line batches, here.
I spent a lot of time learning about KML files, writing them, failing, trying again.
I made colored icons in Photoshop, and used Excel to assign each school the correct icon.
I put all of the relevant data into one spreadsheet and fed it to this little helper ...
Which gave me this KML file ...
Which I fed to Google Earth, running on my Mac.