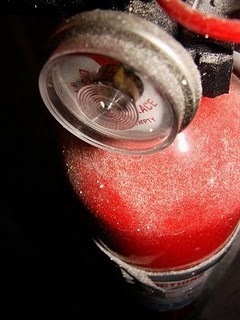 Consider, for a moment, the location of your nearest fire extinguisher.And just how well did you use it last time?Right. Chances are you're not prepared to skillfully put out a fire where you are sitting. At least you're not practiced.But what if you had a non-emergency reason to use a fire extinguisher every once in a while? Maybe to clean your desk. Or a spill. (Nearest paper towel, anyone?) Using it occasionally would help insure that in case of a fire, you would both a) actually use it and b) use it well.To better prepare our on-air and online operations for major breaking news, I've been promoting a point of view that says we shouldn't put our emergency tools, systems and skills "behind glass." Instead, we should incorporate those efforts into our everyday work. (I even believe we shouldn't put our energy into efforts that can't be used on a regular basis because in a crisis, we won't use them anyway.)The best example of this is the daily production of our national morning program, The Takeaway with John Hockenberry and Adaora Udoji. The show's staff may just be the best breaking-news response team in public radio -- because they make the show in real-time every day, incorporating fresh news as they go. When the news happens to be really big, they're not just prepared ... they're already there.A few other examples:

Map maker, map maker
In case of a civil emergency in New York, we'd want to quickly map shelters, closed roads, danger zones, escape routes. Even locate our staff. But we weren't prepared to whip together those kinds of maps in mere minutes. Now we're honing those skills by incorporating such work into everyday projects. Information integration
When news hits the fan, information flies everywhere. Consolidating that data is key ... and also happens to be handy in everyday work. In the course of discussing a Mumbai-like terror attack in NYC, we discovered that our news-editing software can also check a listener email box. That's one less window to watch. Nobody move
We designed our newsroom so that in a crisis nobody needs to change seats, which would move them away from familiar surroundings. As a byproduct, when something doesn't flow quite right during daily work, I try to make sure we address it now so we don't get caught off guard later. Expected events as prototypes
In planning for election night, and now for the inauguration, we developed tools and techniques that will serve us again in a major unexpected event. We now know how to quickly rip up our station's home page to focus on a single topic. And in order to provide real-time election-night returns, we found new ways to clear the information path between the editors and the home page. Share and share again
We share a statehouse reporter with stations across our region. So when former governor Eliot Spitzer imploded in a prostitution scandal, we didn't have to think twice about how to move information and audio between stations. We just used the FTP site and email list we use every day.


I've long been a fan of drills, and there are many more of those in our future. But by incorporating a little drill into our regular routine, we're better prepared for situations that are anything but.[Photo by IamSAM. Some rights reserved.]