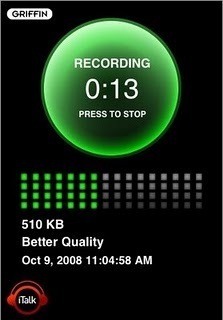 My iPhone is my new flash recorder.As a manager, I'm not often out collecting sound for air. But I've been carrying a Nagra flash recorder just in case I need to contribute in a crisis, happen upon breaking news, or want to capture an aural moment we might use.Today, I gave the Nagra back so someone else can use it.That's because Adam Hirsch, a producer on The Takeaway and a fellow iPhone geek, showed me an impressive, new (and currently free) iPhone app that records fantastic audio using the phone's built-in microphone. It's far better than any apps I've tried for this purpose, and good enough to impress our engineers.It's called the iTalk Recorder, from Griffin. The recordings really do sound great. At the top setting, it makes CD-strength AIFF files at 44.1k and 16 bits. If you have a Mac, a nifty download allows you to transfer the audio from phone to computer over wifi.It certainly won't replace our reporters' professional recording equipment. But in a pinch, or as a backup kit, it's fantastic.For me, that's perfect. And one less thing carry.