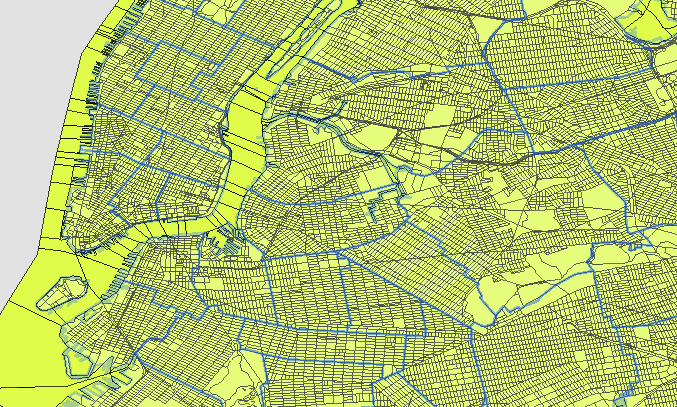 Note: This post was originally published April 29, 2011. I've updated it completely with fresh info. Also just did the same type of calculation for Chicago.

Back in 2011, I wanted to compare the racial and ethnic breakdown of low-level marijuana arrests — reported by police precinct — with that of the general population. The population data, of course, is available from the US Census, but police precincts don't follow any nice, relatively large census boundary like a census tract. Instead, they generally follow streets and shorelines. Fortunately, census blocks (which in New York, are often just city blocks) also follow streets. But there are almost 40,000 census blocks in the city.

So I used precinct maps from the city and US Census block maps to figure out which blocks are in which precincts. With that, the population data is just math.

The original stories, and the Google Fusion Tables where the data lived, are all gone to digital internet history. But I've recreated them here, and also updated the calculations — some precinct boundaries changed slightly, and those on Staten Island changed significantly with the addition of a fourth precinct on the island in 2013.

So here are the updated tables. The population data is from the 2010 census, the precincts are as they exist as I write this in June 2020.

I originally did this work while at WNYC, using PostgreSQL, PostGIS and QGIS. I was helped by the generosity and insights of Jeff Larson, Al Shaw, and Jonathan Soma.

If you find this information useful, drop me a note or post a comment below. I'd love to know about it.