[I recently presented this post as a 5-minute Ignite talk.]

On a morning flight some years back, the pilot's cheerful voice came over the speakers.

"I'm glad you're flying with us. This is the first time I've flown a Boeing 747,” the captain said with a pause. “Today."

We all laughed, of course. Who’d want to be on a pilot’s maiden flight?!

Not us. We want experts. Society counts on them. Companies pay them better. Spectators watch them play. Vacationers rely on their forecasts. We attend educational institutions and work long hours to become them — the qualified, the trusted, the best.

Nobody likes being a beginner.

Except that I do.

The case for beginning repeatedly

Half jokingly, I added "professional beginner" to my Twitter bio last year. I’d spent six years helping to dream up and build new data projects for news stories, and at one point attempted to make something new every week for a year. Journalism, where I’ve lived most of my life, is often an exercise in quick learning followed by, we hope, accurate explaining.

And today Quartz literally pays me to help dream up and build things that don't exist, regardless of whether I know how to make them.

I love it. And I’m here to tell you that being an intentional, serial beginner -- setting out to learn and make new things repeatedly — is incredibly valuable:

Unexpected results from “Make Every Week”

At the start of 2015 I set out to make something new every week, blogging about each thing along the way. I ended up making 30 things, so it was more like make every 1.7 weeks. The full list of crazy projects is here.

One of those projects was a low-power temperature texter that could monitor a room’s temperature for many weeks, recording and texting the readings periodically.

At the time I was working at public radio station WNYC. One day we were approached by Adam Glenn of AdaptNY, who had seen our work monitoring heat in the New York City subway system. He wanted to study the problem of Harlem apartments that get unbearably hot in the summer.

And because had been making things every week for fun, I knew exactly how we could do it. 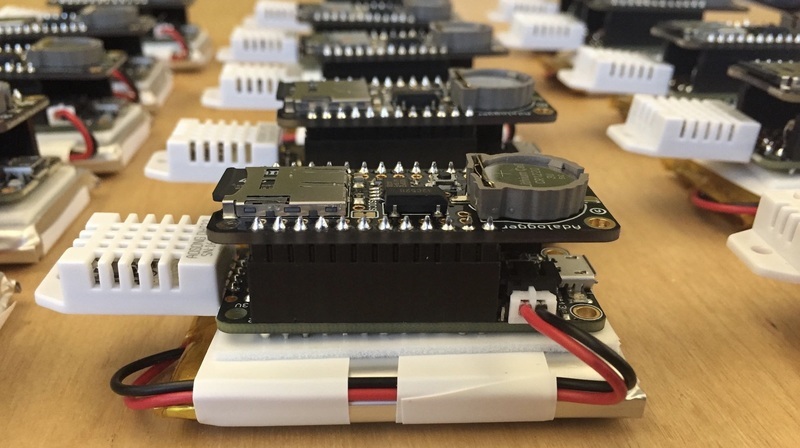 We eventually hand-built 50 heat sensors to take and record temperature and humidity readings every 15 minutes in stifling apartments across Harlem. The data collected by these little devices led to a summer-long radio series, including one story where we even set the data to music. (It's radio, after all.)

Not only did our work highlight the problem of overheating apartments — along with the causes and possible solutions — but it also led to an honest-to-goodness scientific paper in the journal of the American Meteorological Society.

Meanwhile, an editor in the publishing division of Make Magazine saw my blog, and invited me to write a book.

All because I was beginning repeatedly.

I have dozens of other examples, not the least of which is the build-a-bot project that led to my current job.

This summer I was the theme speaker at a conference about “Play” on Star Island. I talked about “Make Every Week,” and afterward an Episcopalian minister friend said it sounded a lot like a spiritual practice. It was something that I did regularly, that had a set structure, that made me feel good inside and, as it happened, sometimes benefited others.

And I think it’s time to restart Make Every Week, this time adding a focus on beginning: making new things but also exploring new concepts, generally being a novice, playing and having fun. And, as before, sharing sharing my imperfect adventures along the way.

Care to join me? Just add your email to the box below and I’ll keep you posted.

Update: Here's an Ignite talk about this idea I gave at Newsgeist 2018.

Top photo by Anne on Flickr; sensor picture by me.