If you need more proof that it's valuable for journalist-programmers to show their work, here's some: WNYC's Live New Jersey Election Map.

Exactly one week after Albert Sun of the Wall Street Journal New York Times shared some of his work, we made this: 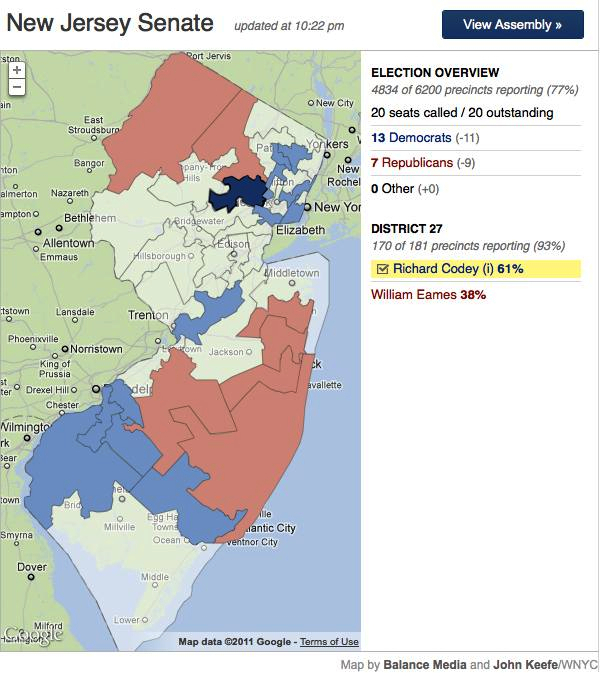 Last month I went to a Hacks/Hackers NYC meetup about mapping. There, Albert showed his WSJ Census Map Maker project and a map I had admired that has dynamic mouse-overs without using Flash. At one point, he showed his project's code repository and welcomed us to use and build on it.

The next day, I downloaded the code and tried to make a rough version of Albert's map, but using the shapes of New Jersey legislative disricts (downladed from the US Census, stored in this Fusion Table, which generates this KML file). After a little tinkering -- which includes a fix I've described in the comments below -- I managed to build one that works. I sent that to stellar coder Jonathan Soma, of Balance Media, who works with me to build interactives for WNYC.

I also reached out to Al Shaw, of ProPublica, who I knew (from another Hacks/Hackers Meetup) had wrestled with live Associated Press election data for Talking Points Memo. He had some great tips, which I passed along to Soma, too.

Also on the case were Balance's Kate Reyes and Adda Birnir, who crafted the map's design and user experience -- a particularly tricky task because each district elects one person for state senate and two people for state assembly.

A week later, as the results rolled in, WNYC's map was live and rockin' -- listing real-time returns for each district, and changing colors when races were called.

In the process, Soma built on Albert's work, and those modifications are now a part of the code base (see Github commits here and here).

And if you need proof that such work is valuable, the map was WNYC's No. 6 traffic-getter for the month -- despite the fact it was truly useful for about 4 hours late on the evening of an off-year election.