During the setup only, I also used:

The Alexa Pi code isn't some under-the-table hack; the Amazon Alexa team itself has posted a complete guide for setting up Alexa on a Raspberry Pi on Github! Which is pretty amazing. I started by installing a new Raspbian operating system on the Raspberry Pi as described in Amazon's instructions.

Here I got stuck for a moment, because even though some documentation says using a 4GB memory card will work to hold the Pi's operating system I found that I needed to use (and go get) something bigger. I used a 32GB card.

Also, I'm using Version 1 of the Pi, and almost all of the documentation refers to Pi versions 2 and 3. But there's a discussion thread about using Version 1 that includes this comment about an extra shell command you need to use for Version 1:

With the Pi software set, I was ready to install Alexa.

Wake Me Up with Your Voice

When you use an Amazon Echo, you engage Alexa by saying "Alexa ..." followed by your command or question. Like "Alexa ... what's the weather today?"

About 15 days ago, the Amazon team added this "wake word" ability to the Pi code. They do this by including, and supprting, third-party speech sensing software. That software has some licensing restrictions you may want to check out.

I'm fully intend to try this, following all of the Amazon team's instructions. But when I built mine just a month ago, I did something slightly different.

Wake Me Up with a Button

My setup uses a physical button to "wake" Alexa -- partly because the "wake word" support didn't exist a mere four weeks ago(!), but also because I liked that something physical would be needed to open a microphone in the middle of my house. So I followed the instructions described in a video by Novasprit Tech, with some minor changes:

Here's the wiring diagram for the button and LED: 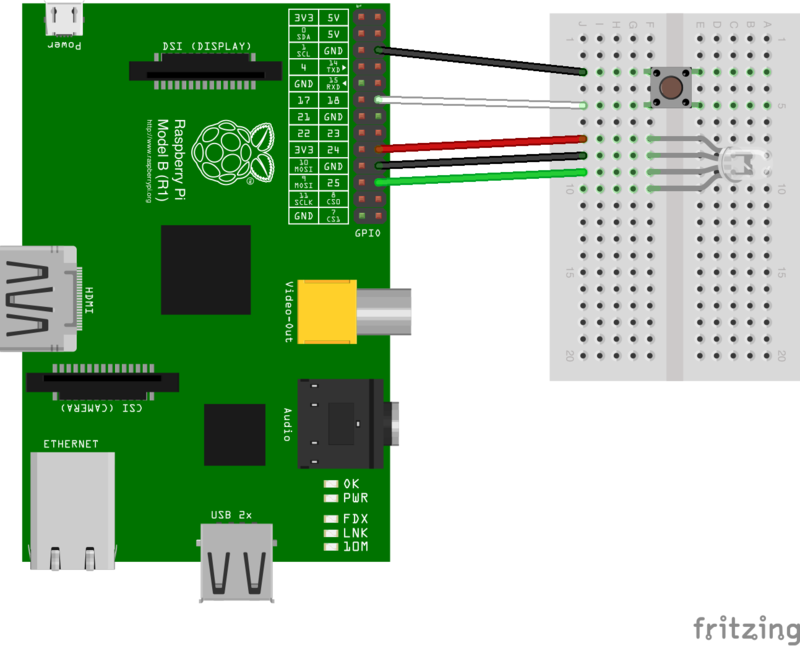 The Male-Female jumper wires make it easy to connect the Pi to the breadboard. Note that the GPIO pins for various versions of the Pi may be different. The key things to know are:

Here's more info on how the pins are numbered on a Pi.

Once I got it all wired up, it worked!

One big improvement would be to power the speaker from the Pi's power supply, if that's possible. Right now, I'm using a battery-powered speaker, which I have to turn on to use Alexa (and remember to turn it off when I'm done).

The whole point of having a working version of Alexa was to try my hand at making "skills" -- which are like apps -- to extend the bot's capabilities. So that's next!